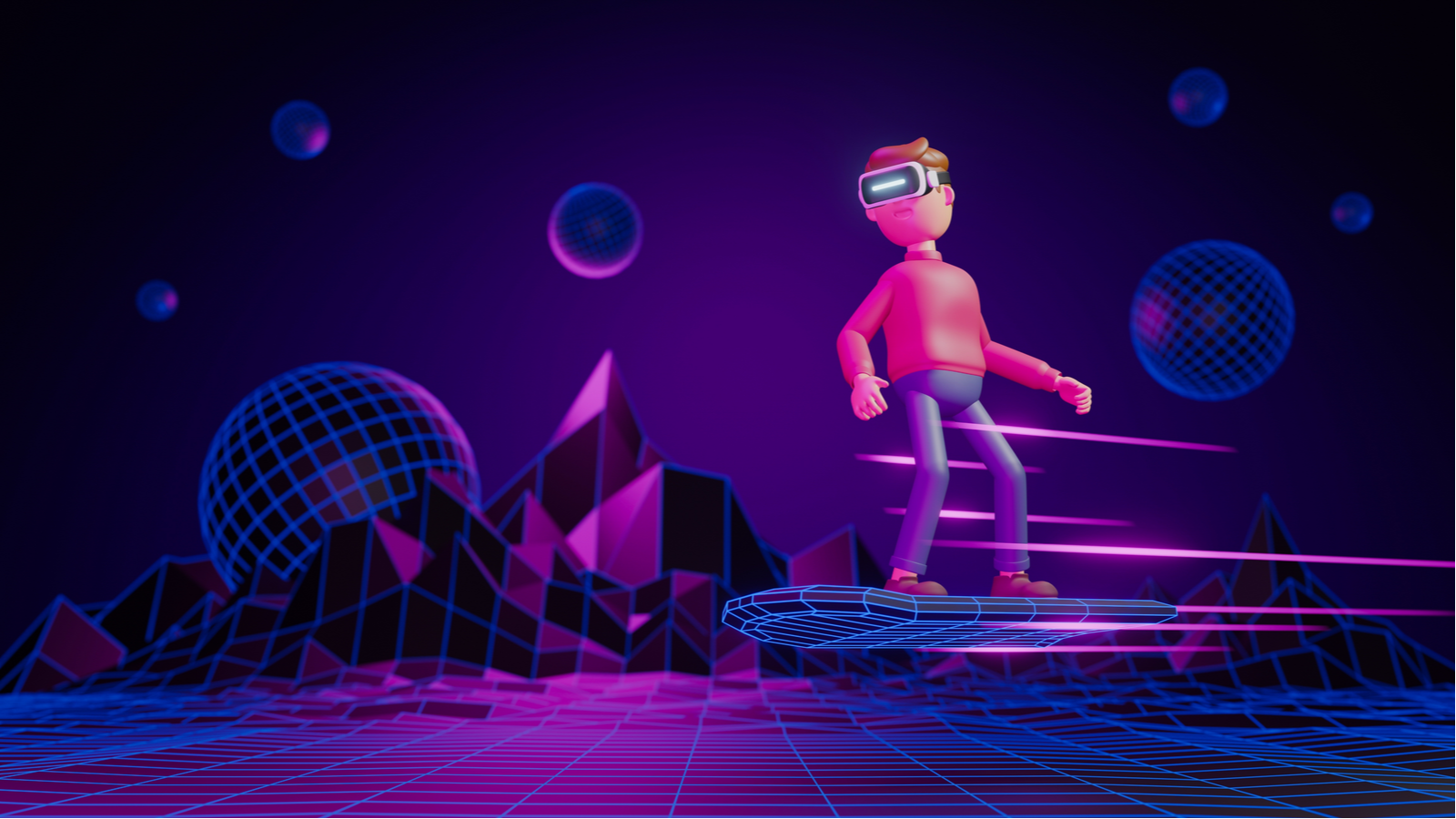 Amid the economic chaos of 2022, investors have all but forgotten about VR and the once-promising metaverse. Since late 2021, Google search interest in the metaverse has collapsed by 88%. And stocks like Roblox (RBLX) and Meta (META) have been absolutely crushed. 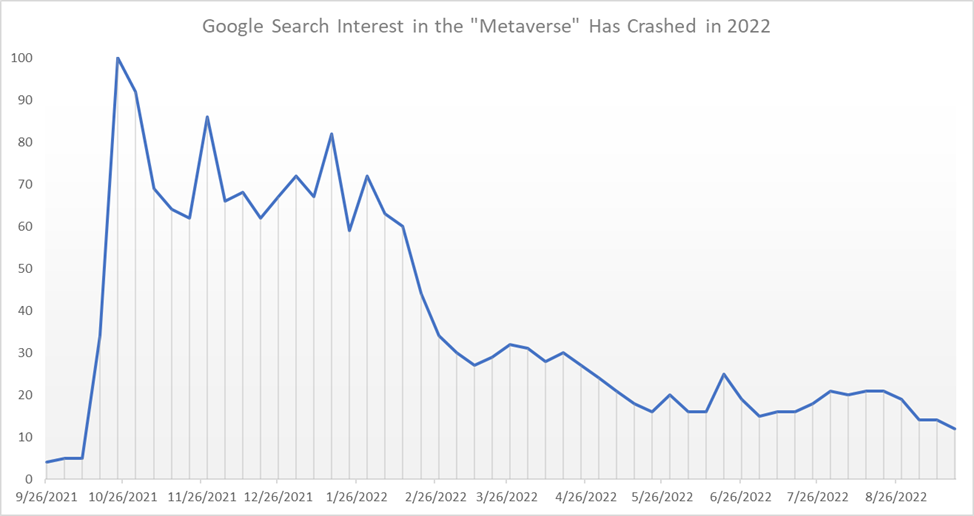 But maybe investors shouldn’t have forgotten about the metaverse.

They were just missing something in 2022.

And if that’s the case, then the “missing link” may have just arrived to the party. And we think it could reignite a Metaverse Gold Rush over the next 12 months.

The Metaverse Is Destined for Greatness

To start, let me make one thing abundantly clear. Our team has always thought that the metaverse is destined for greatness. But we never believed the metaverse “prototype” introduced to the public in 2021 was the version that would succeed.

The metaverse will be big – but it won’t be centered around people wearing headsets and living in virtual worlds. It’ll hinge upon glasses, contacts, and next-gen computer desktops that integrate VR, XR and AR technologies with the real world.

The argument for the metaverse is pretty simple.

It all boils down to one thing: Humans are natural escapists. We like reality, sure. But we also like to escape it sometimes.

A few decades ago, we escaped via analog platforms like books, magazines, and movies. They leveraged our imaginations to transport us to places we hadn’t seen and feel things we hadn’t felt.

Today, we escape via 2D-internet platforms, like video games, social media, and streaming shows. They do the same thing as those analog escape mechanisms – but are far more immersive.

In the future, we’ll escape via 3D-internet platforms like VR gaming, virtual bars/clubs, and immersive shows and movies. These experiences will bring an entirely new level of immersion that will massively heighten the consumer experience.

It’s the natural progression of things. 3D-internet platforms represent the next evolution of human escapism.

The version of the metaverse pitched to the world in 2021 was awful for a lot of reasons. Dorky avatars, corny-looking virtual worlds, awkward presentations from Mark Zuckerberg…

None of it was any good.

But chief among the reasons that 2021 version would never succeed was hardware. Put simply, clunky headsets don’t get a lot of people excited.

Remember: The internet didn’t become a ubiquity until a bold company by the name of Apple (AAPL) made a tiny, accessible, convenient, and even stylish hardware device called the iPhone that put the internet in the palms of everyone’s hands.

The point? Even the best software technologies don’t become ubiquitous until the right hardware is invented and deployed. Typically, that “right” hardware involves something unintrusive, inexpensive, accessible, and stylish. It’s something that 99% of consumers wouldn’t mind using on a daily basis.

The VR Tech of the Future

But contact lenses are – which is why we’re super-enthused by the work of a tiny startup in California by the name of Mojo Vision. The company is working on AR contact lenses that compress the AR capabilities of a headset into a simple contact lens and then overlay those visuals onto the real world.

That’s a version of the metaverse we can get behind. Imagine playing a round of golf with friends. And after every shot, a little contact lens in your right eye displays an unobtrusive overlay of virtual information telling you the characteristics of that shot (power, distance, etc.) and then displays an updated scorecard for that game. 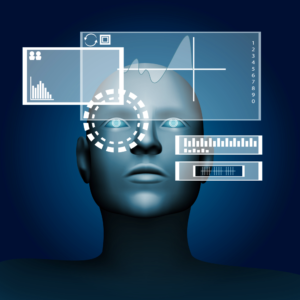 Or how about this? Virtual desktops.

There’s another startup by the name of Brelyon that has designed what we believe will be the future work desktop. It’s a 122-inch long, 5-foot-deep curved screen intended to be placed on a desk in place of a standard monitor. The idea is you simply put your head into the center of this VR monitor – while sitting or standing at your desk – and plug into a virtual desktop.

I don’t know about you, but as someone with four different computer screens on his desk, this next-gen Brelyon desktop sounds like a perfect fit!

That means within the next 12 months, we expect a few of these innovations to come to the mass market. And at that point, we think the metaverse will finally come into its own.

The VR Gold Rush will begin – and we will be ready to profit big from it.

The Final Word on VR and the Metaverse

Listen, I don’t blame you for giving up on the metaverse. I almost did, too. The version of the metaverse peddled in 2021 by Mark Zuckerberg & Co. was a joke.

But that’s not the version of the metaverse that will succeed.

The one that will is the version that blends innovative, accessible, and unobtrusive hardware with VR and AR technologies, seamlessly integrating virtual information into the real world.

That’s the version of the metaverse I’m excited about. And it’s the one currently being built in engineering labs all across America.

So, no, now is not the time to throw in the towel on the metaverse. On the contrary, now is the time bet big on it.

Pretty much every metaverse stock out there has been crushed in the 2022 stock market selloff. From current levels, some offer generational investment opportunities.

Find out which are the best stocks to buy for $500 or less today.