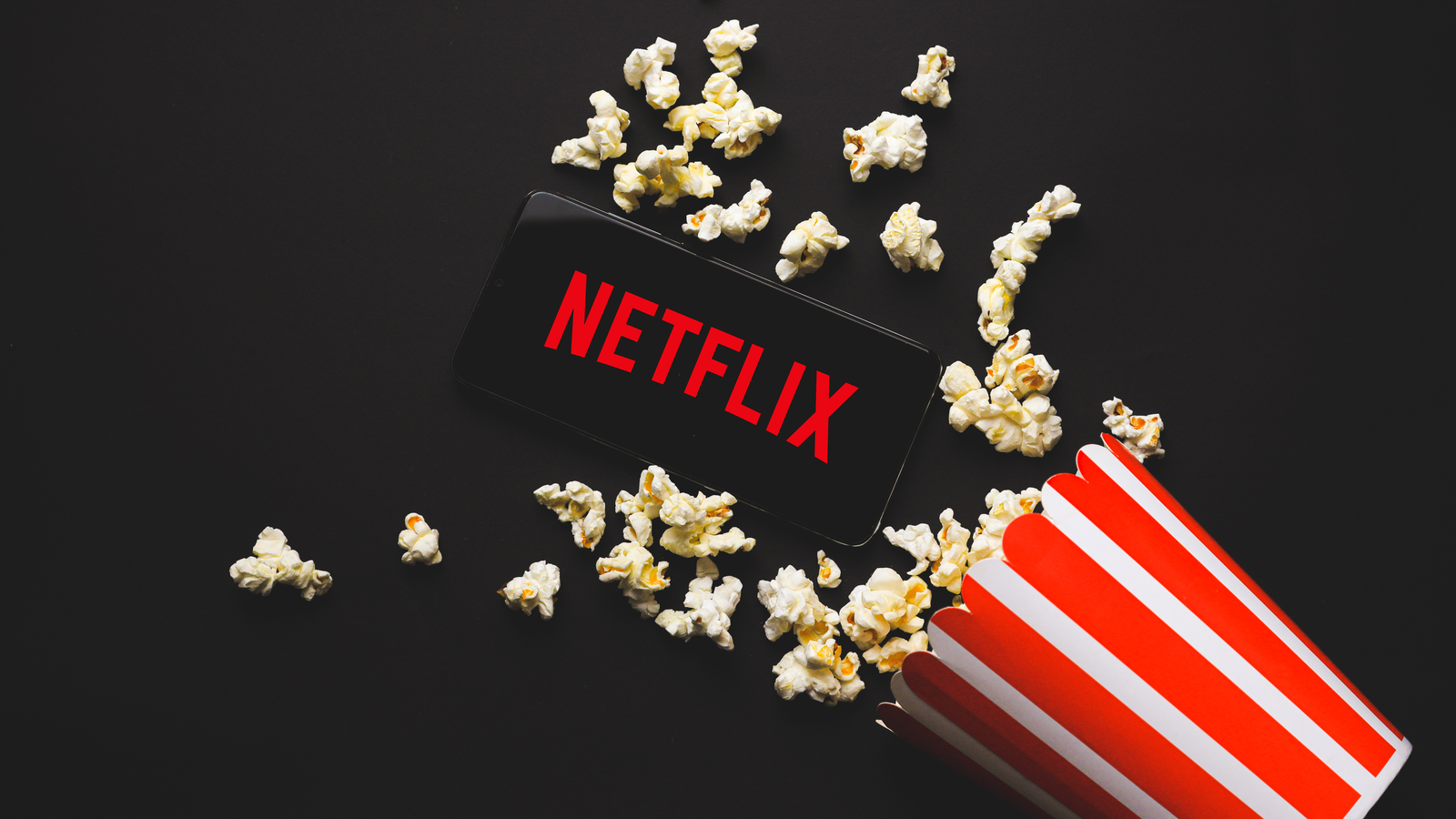 All eyes were on Netflix, Inc. (NASDAQ:NFLX) earlier this week ahead of its earnings release on Tuesday after the market close.

The analyst community was calling for earnings of $2.96 per share on revenue of $8.0 billion and for a 1.9 million drop in paid subscriber. This follows the 200,000 paying subscribers Netflix lost in the first quarter and its guidance for a two million loss in the second quarter.

The reason for the drop?

Experts cite inflation and competition from services like The Walt Disney Company’s (NYSE:DIS) Disney+ are to blame.

And competitors are closing in: 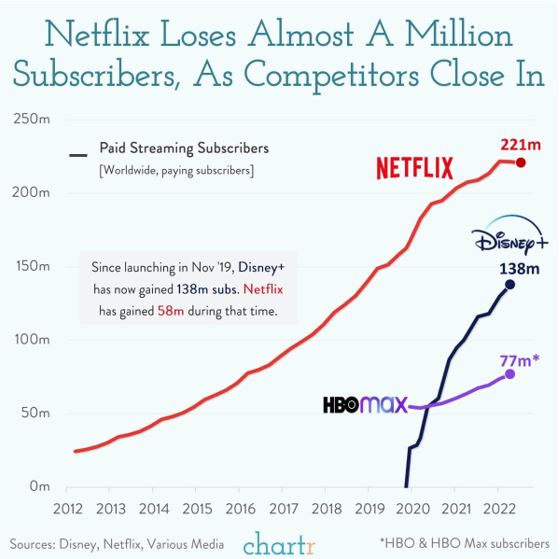 But the fact is, while other streamers are catching up, Netflix still holds a big piece of the pie. With a cheaper ad-supported level in addition to a crackdown on password sharing, Netflix hopes to regain its dominance.

So, in today’s Market360 we’re going to take a look at Netflix’s second-quarter earnings… and I’ll share whether or not it’s time to buy…

Not As Bad As Expected…

Netflix saw a drop of 970,000 subscribers in the second quarter – better than Netflix’s own guidance for a 2 million loss and analysts’ expectations for a 1.9 million loss.

For the quarter, Netflix reported adjusted earnings of $3.20 per share on revenue of $7.97 billion, or 7.7% year-over-year earnings growth and 8.6% year-over-year revenue growth. So, Netflix topped earnings expectations but fell slightly short of revenue estimates.

For the third quarter, company management anticipates earnings will decline 34% year-over-year to $2.14 per share. Revenue is expected to increase 4.7% year-over-year to $7.84 billion. This is below analysts’ estimates for third-quarter earnings of $2.75 per share and revenue of $8.1 billion.

However, investors were pleased with the report, driving Netflix shares up 7% on Wednesday to close above $216 per share.

I should also add that before earnings, Netflix announced a partnership with Microsoft Inc. (NASDAQ:MFST) to launch its cheaper ad-supported plan early next year.

We’ll likely start in a handful of markets where advertising spend is significant. Like most of our new initiatives, our intention is to roll it out, listen and learn, and iterate quickly to improve the offering. So, our advertising business in a few years will likely look quite different than what it looks like on day one.

Netflix also noted, as reported by CNBC, that it is in the early stages of a paid sharing plan. The plan would upcharge some members for sharing their subscription with family members or friends that live outside their home.

But that is not all Netflix is doing; they are also going all-in on content. They want to recreate the Stranger Things magic it’s seen. Stranger Things’s fourth season premiere was a record for the company, with 286.7 million hours streamed. It also ranked No. 1 in 93 countries. For the full season, total viewership hit 1.15 billion hours within 28 days since the fourth season first premiered on May 27.

The company says it expects to see a return to subscriber growth in the third quarter, forecasting one million new paying subscribers.

Losing a million [subscribers] and calling it success is tough, but really, we’re set up very well for the next year. If there was a single thing [that boosted performance], we might say Stranger Things. We’re executing really well on the content side. We’re [also] in a position of strength given our $30 billion-plus in revenue, $6 billion in operating profit last year, growing free cash flow and a strong balance sheet.

So, with better-than-expected earnings, is it time to pick up shares of Netflix?

Let’s see what Portfolio Grader has to say.

Netflix Isn’t A Buy, Yet

Netflix currently sports a “D” grade in Portfolio Grader. This means NFLX is not a buy, in fact, if you own it, it’s time to sell (if you haven’t already).

In fact, if you had followed Portfolio Grader, you would have sold NFLX before its disastrous first-quarter earnings report… when shares started to suffer: 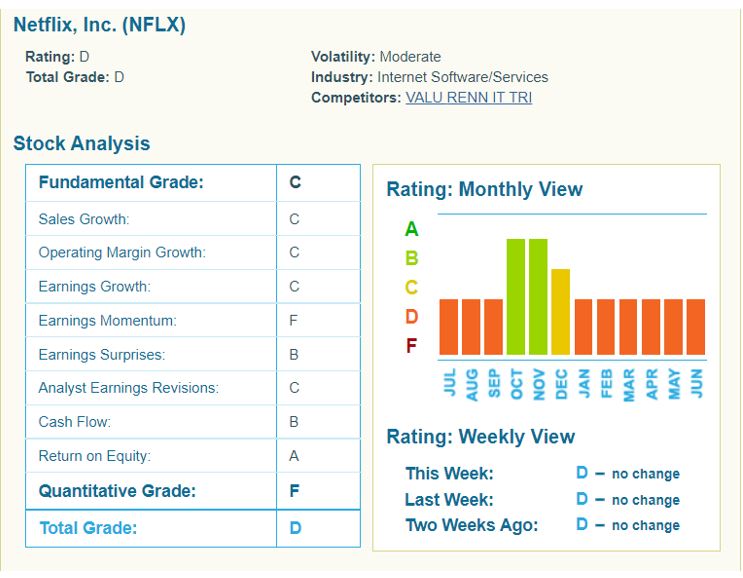 While the stock staged a solid post-earnings rally, the fact of the matter is it has no earnings momentum – as evidenced by the expected earnings of just $2.14 per share in the third quarter – and revenue growth is also not much to get excited about. I should also add that even with the 7% pop, Netflix shares are still down more than 60% year-to-date.

That’s not to say that it won’t make a turnaround in the future. As I mentioned, they still have a large market share.

And lined up against its competitors, NFLX isn’t the worst:

But I still wouldn’t buy at these levels. As you can see, streamers on the whole are hurting.

Instead, I would focus on companies that are hyperscalable – the ones that can massively grow revenues while minimally growing the costs associated with producing. Based on Netflix’s latest earnings report, it’s not one of them.

The good news is I found an exciting new hyperscalable company whose technology you likely use on a daily basis. In fact, there’s a good chance you’re using its technology to read this Market360 article right now.

I just released my recommendation of this company this afternoon – ticker symbol and all. It’s a screaming buy with huge upside potential. If you want the name, click here.

Once you do, I’ll also send you a free report called The Hyperscale: Why the Next Leap in Online Technology Could Make You 1,000% on the Best Little Stocks. Inside, I explain why now is the moment you’ve been waiting for.

In short, I predict this year’s selloff is about to hit a massive turning point that could make you 5x or 10x your money through a historic unveiling in Houston, Texas, this summer. It could cause some of the best-known companies to crash or go bankrupt, while other companies could go on to rise 10,000%. But you must get in now while these hyperscalable stocks are still trading at bargain prices.

And today’s special recommendation – which I just revealed moments ago – is the way to play it.

The Editor hereby discloses that as of the date of this email, the Editor, directly or indirectly, owns the following securities that are the subject of the commentary, analysis, opinions, advice, or recommendations in, or which are otherwise mentioned in, the essay set forth below:

Stocks making the biggest moves midday: Disney, Poshmark, Vroom and more
Don’t Get Lured into Activist Investor Narrative with PayPal Stock
5 Stocks That Will Get Worse Before They Get Better
7 A-Rated Tech Stocks to Buy and Hold Now
3 Monthly Dividend Stocks to Buy for Safety